Can You Fail a Drug Test From Secondhand Sm... 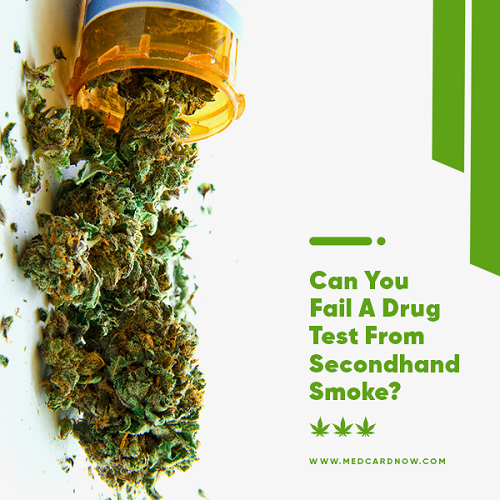 While cannabis is now legal in many states including California marijuana drug testing is still common especially urine testing pre-employment as well as workplace drug tests and the possibility of getting drug tested at the side of the road.

Can Secondhand Smoke Exposure Cause You to Fail a Drugs Test?

While technically it may be possible to fail a drugs test from secondhand smoke, in reality, it’s very unlikely. Drugs tests have a cut off level and in part, this is designed so as people will not test positive due to second-hand exposure. If levels are set too low people could claim passive exposure or in the case of opiates use what is known as the poppy seed defense, claiming they tested positive due to eating poppy seeds rather than taking drugs.

The National Institute on Drug Abuse has published a marijuana research report which looks, amongst other things, at the effects of secondhand exposure to marijuana smoke including the possible psychoactive effects and the possibility that someone could fail a drug test from secondhand smoke.

NIDA. 2020, April 8. What are the effects of secondhand exposure to marijuana smoke?. Retrieved from Drug abuse website.

They cite research finding that exposure to secondhand cannabis smoke in a ventilated space for 3 hours was sufficient to show the presence of THC in the blood and urine of non-smoking participants. But that the levels of THC were not enough to produce positive results on a drug test. This would be akin to sitting in a coffee shop with friends who were smoking for several hours but not actually smoking yourself.

However, when cannabis potency was high enough and smoked in a confined unventilated space, passive smoke exposure to marijuana was sufficient to produce positive drug tests from nonsmoker urine and participants reported a mild high. It is worth noting however that only one of six participants showed high enough levels to test positive and that even lower levels of THC could not be detected after 24 hours.

Although this evidence suggests that it could be possible to fail a drugs test due to the THC in your system from inhaling secondhand pot smoke secondhand exposure is still deemed highly unlikely to lead to impairment or the failing of a workplace drug test, even if you were stuck in an enclosed place with a heavy smoker.

This is due to the fact that very little THC is exhaled by marijuana users and so you would have to be in a room with a number of cannabis users all smoking cannabis with high THC concentration before passive exposure would cause you to test positive for THC.

If you use cannabis medicinally for pain management or other reasons you may wish to choose a medical marijuana strain with lower levels of THC and higher levels of CBD. CBD doesn’t produce any psychoactive effects and does not show up on a drug test result meaning the likelihood of failing a drug test from passive exposure would be even more minimal.

If you need a medical marijuana card you can apply for a letter of recommendation online today, risk-free, and receive your results in minutes.

Can You Get High From Secondhand Smoke?

While the research mentioned above suggests that under certain conditions non-smokers reported feelings of a mild high and showed slight cognitive impairments after intense exposure to passively smoked cannabis, again the amount of THC being exhaled is unlikely to get you high.

Even in an intentional ‘hot box’ the additional high being felt is more due to the elevated levels of CO2 and the slight lack of oxygen. So while exposure to smoke of any kind isn’t going to do you any good and children certainly shouldn’t be exposed in reality occasional exposure is unlikely to either get you high or do you any harm.

If you are looking to get high without smoking cannabis edibles are a better option. Just be aware that the effects of eating cannabis products take longer to feel and tend to be stronger in relation to the amount of THC you have consumed.

Choosing medicinal cannabis products can be a good option as they are well regulated. If you need a medical card you can apply online and get a doctors recommendation letter for many conditions including anxiety, pain, insomnia and nausea.

While it seems unlikely that you would fail a urine drug test or even an oral fluid test from passively smoked marijuana, it is one of the common myths that has just enough of an element of truth to make it stick, there are potentially other effects of secondhand marijuana smoke that you should be aware of.

Not enough research has been done on the effects of secondhand exposure to pot smoke. A lack of funding combined with marijuana laws in individual states not overriding the fact that marijuana is illegal at the federal level means that there has been limited research into the effects of cannabis consumed let alone passively.

More research needs to be done to be sure of the effects but it would appear to be advisable to avoid secondhand smoke as much as possible especially for children and those with respiratory conditions at least until more is understood about the possible long term effects.