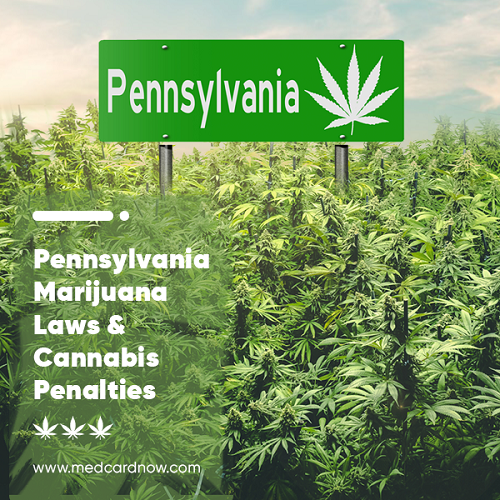 Although Pennsylvania has made marijuana legal for medical use there is no legal recreational use of cannabis in most parts of the state. However there has been some local decriminalization meaning that in certain cities including Philadelphia and Pittsburgh punishment for possession of small amounts of cannabis, usually under 30g is punishable by a civil fine, typically of between $25 and $100 with fines increasing for subsequent offenses.

Pennsylvania law like federal law treats cannabis as a schedule 1 controlled substance. This means that even possession of small amounts of marijuana in Pennsylvania is a misdemeanor offense. Possession of under 30 grams of recreational weed carries a maximum fine of $500 and a potential 30 days in jail.

A first offense of marijuana possession is eligible for conditional release but a subsequent conviction could result in a doubled penalty so until recreational legalization it is important to make sure you have the right certification if you intend to use therapeutic marijuana in PA.

The sale and distribution of under 30 grams of cannabis are also considered a misdemeanour with fines of up to $500 and a possible sentence of 30 days in jail. However, if you sell or distribute larger amounts this would count as a felony facing a minimum 2.5 prison sentence up to 5 years and a $150000 fine.

To sell or distribute any amount of cannabis within 1000 feet of a school or 250 feet of a playground carries a sentence of 2-4 years of jail time.

The possession or sale of drug paraphernalia is also a misdemenor and is punishable with a maximum sentence of 6-12 months or $2500.

Unlike some other states including California, cultivation of cannabis, even small amounts for personal medical use, remains a felony punishable by 2.5-5 years in jail and fines of up to $15000.

In order for patients to legally access cannabis in Pennsylvania and get a medical marijuana card they must get a recommendation for a registered doctor. You can apply online today here and get a PDF copy sent immediately after approval.

The bill also set up a state-licensed system of distribution for patients with a qualifying condition. Patients can purchase medical cannabis in a number of forms including pills, oils, tinctures and cannabis flowers, however, medical marijuana law does make any provision for personal cultivation of the plant.

In fact cultivating any amounts of marijuana in Pennsylvania remains highly illegal and under current cannabis law growing even 1 plant is considered a misdemeanor punishable by a jail sentence of between 6 months and 2 years and a fine of between $500 and $2000.

Although currently Pennsylvanian marijuana laws prohibit the recreational use of cannabis there are moves being made to get marijuana legalized in Pennsylvania. In 2019 Gov Wolf, who signed the Pennsylvania medical marijuana bill in 2016, announced a statewide listening tour by lieutenant governor John Fetterman.

John Fettermans listening tour would tour all 67 counties and be attended by over 10,000 people. The report from the tour showed that well over half the people would be in favor of making recreational cannabis legal and even more support for decriminalization.

Gov Wolf and lt gov Fetterman called for debate and consideration on new legislation that would make recreational weed legal. Most recently they argue that new marijuana laws legalizing pot would assist Pennsylvania in its post pandemic recovery.

However, untill pennsylvania legalize weed, if you suffer from severe chronic or intractable pain or any of the other conditions approved under medical marijuana laws you can apply for a doctors recommendation today.

Medical Marijuana: What You Need For a Prescription