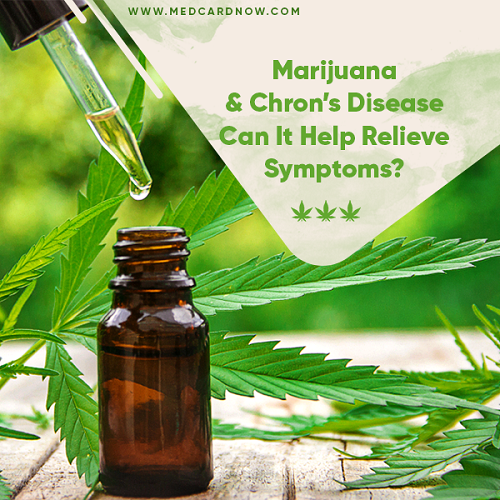 The use of medical Marijuana is becoming more popular, especially with an increase in scientific evidence behind its potential benefits. Marijuana in Chron’s disease management is now also being suggested. Marijuana for Chron’s patients is only one of the many cases where this drug, once considered illicit, is used.

There is still research behind done to help medical experts fully understand Chron’s disease. It has been found that there is an immune response associated with the development of the condition.

How Chron’s Disease Affects The Patient

Chron’s disease is considered one of the more common types of inflammatory bowel disease, along with ulcerative colitis. These two conditions affect about 1.3% of the adult population in the United States at any given time. There has been a significant increase in the prevalence of Chron’s disease in the last three decades as well.

Symptoms associated with Chron’s disease tend to vary from one patient to the next. In some cases, a person may only have mild symptoms. This may lead to some discomfort, but not enough to interfere with their daily activities.

In other patients, the symptoms may be more severe. This can cause a significant disruption in the person’s ability to conduct their day-to-day activities.

Some symptoms that are generally experienced by people with Chron’s disease include:

This is a relapsing-remitting condition. It means that symptoms generally come in “flare-ups.” A person may experience symptoms for a few days or even weeks. After this, the condition goes into remission for a period of time. This is until the next flare-up occurs. There will often be no signs that a flare-up is developing, which means the symptoms may come on suddenly. In turn, the individual may find that it causes a serious disruption in their daily life.

No cure has been found for people with Chron’s disease. There are, however, treatments that help in the management of the condition. The current treatments focus on helping to reduce the severity of symptoms. Some people also find that they are able to remain in remission when they use the right medication for Chron’s disease.

Medical Marijuana has become a hot topic in recent years. It is now even prescribed to some patients. There are several conditions that are treated with the use of medical Marijuana. In some studies, research suggests that medical Marijuana Chron’s disease treatment might be an option for doctors and medical experts to consider.

With this in mind, the real question that needs to be asked is can Marijuana help Chron’s disease.

To answer this, we need to turn our focus to recent studies that have been conducted on the subject. This will help us understand if smoking Marijuana with Chron’s disease is a good idea. It will also help us determine how can Marijuana help Chron’s disease.

In 2018, one of the very first studies were published that showed improvements in Chron’s disease symptoms following the ingestion of Cannabis products. One primary reason for such a late study is due to the legal issues surrounding the Cannabis industry in the past.

In the United States, we have seen several areas opening up to the use of Marijuana in just a short period now. This has given scientists and researchers the ability to delve into a new alternative and natural treatment for several conditions – and in this case, the condition is Chron’s disease.

The participants were divided into two groups:

The study lasted for a period of eight weeks. Tests were conducted prior to and after the study. This allowed for more accurate results to be documented as part of the study.

Among the placebo group, a total of 35% had experienced an improvement in their symptoms. Clinical remission was noted in these participants.

The results were much greater among those individuals who were provided the cannabis oil. There was a clinical remission rate of 65% among these participants.

Researchers behind the study concluded that the Marijuana effects on Chron’s disease do seem to be positive. Marijuana Chron’s remission was the primary benefit that researchers were able to record in this study. The study also suggests that both CBD and THC for Chron’s disease might be a good idea – the combination seems to provide more significant results.

While we have seen more scientific evidence suggesting Marijuana for Chron’s and Colitis might be a good idea, one review paper says that the research is still too limited. This was a systematic review. It was also published in 2018. The paper was published in the Cochrane Library.

The idea behind this systematic review was to see whether Marijuana for Chron’s treatment would actually hold any potential. The review paper considered both oils and herbs that were used by patients with Chron’s disease.

Three previous studies were analyzed by the researchers who compiled this systematic review paper. The researchers looked for papers to help them see if Marijuana causes remission of Chron’s disease and whether weed for Chron’s disease is something that medical experts and doctors should be prescribing.

The paper concludes that current evidence on how does Marijuana affects Crohn disease is very limited. In fact, they mention that whether Marijuana helps Chron’s disease cannot be concluded with the amount of evidence currently available. The paper calls for further research to help in determining if there is a positive connection between CBD, THC, and Chron’s disease.

Results from the three studies analyzed were published by the researchers:

Study 1: A total of 21 participants were involved. All had Chron’s disease. The participants were divided into two groups. One group smoked a marijuana cigarette. The other was offered a placebo. The study lasted for eight weeks. There was an increase in remissions among those who smoked Marijuana. The study did also mention more side-effects in this group. Side-effects included nausea, confusion, memory loss, and sleepiness.

Study 2: 22 people participated in the study. Oil was used for testing purposes. The oil contained marijuana extracts. This allowed for the testing of THC oil Chron’s disease associations. One group received this oil. The other group received a placebo oil. There was not a significant difference in the remission rate.

Study 3: There were 50 people divided into two groups. Marijuana oil was also used in this study. The study lasted for eight weeks. This particular Marijuana and Chron’s disease research study did yield positive results. There was a more significant improvement in the quality of life among the people who use Marijuana oil.

While limited, people can still consider seeing if Marijuana helps Chron’s disease in their own case. Some may find that medical Marijuana Chron’s remission is a possibility – but the effects will not occur in every person who tries it.

Chron’s disease is a specific type of inflammatory bowel disease. It causes inflammation in the digestive system. The condition can cause several symptoms, which may sometimes be severe. Marijuana is now being considered as a potential treatment for patients with Chron’s disease. Weed for Chron’s disease is still being studied. Some have found that weed helps Chron’s disease, but it is suggested to consider further studies before making any final conclusions.

The Unintended Consequences of Getting a Medical Card