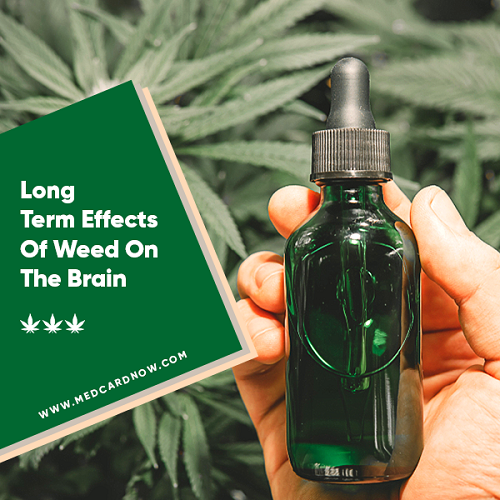 Marijuana, more commonly referred to simply as “weed,” is one of the most widely used psychoactive drugs in the world. Over 3.8% of the worldwide population use Marijuana as a recreational drug. This accounts for over 158.8 million individuals. In the US alone, almost 100 million people have used Marijuana in the past, at least on one occasion. One alarming statistic is that an estimated 6.7% of children between 12 and 17 years have also used this drug.

While there are medicinal uses for Marijuana, smoking weed can also be bad for you. There are long-term effects that need to be taken into consideration. Using the drug for recreational purposes often means a person will consume large amounts of weed, sometimes at frequent intervals. Regular marijuana use could potentially lead to changes in brain structures. The adolescent brain seems to be at the highest risk, as well as the brains of unborn children.

Marijuana As An Addictive Substance

Concern about people smoking weed has become an increasingly popular topic. Several regions of the world have started to legalize the use of Marijuana. This means the statistics for weed users are increasing even more. With this in mind, people are advised to consider all aspects of weed before they become a user.

The effects of Marijuana on the brain need to be taken into account. Additionally, the question: “Is Marijuana addictive?” also needs to be answered.

Many believe that Cannabis consumption will not lead to dependence. They often consider weed not to be part of the “drug world,” which means the consequence of Marijuana use tends to be overlooked by most people.

There are, however, studies that suggest that Marijuana may have the potential to lead to dependence.

The Substance Abuse and Mental Health Services Administration suggests that there is a definite risk of abuse and addiction among Marijuana users. The risk of Marijuana dependence seems to be significantly higher among the younger generations too.  While about 10% of adults will become addicted, about one in every six adolescents may suffer from addiction following exposure to Marijuana.

The National Institute on Drug Abuse has also commented on the topic. According to research, they suggest that up to 30% of Marijuana users may be at least somewhat addicted to the drug. The addiction is referred to as Marijuana use disorder.

These facts already mean that there are longterm effects associated with the use of the drug. While the short-term effects mostly include psychoactive events – in other words, feeling “high” – over a longer-term, addiction can develop.

What Are The Effects On The Brain?

Brain health is important – it helps a person grow up and take on a job that requires quick thinking skills, along with a smart mind. When it comes to cognitive functions like memory, the area of the brain that comes to mind is the hippocampus. This is the area that works with these functions. It helps a person process information. It also ensures memories can be formed.

Cannabinoid receptors are found throughout the entire body. The brain also contains some of these receptors. They form part of the cannabinoid system – the system that reacts to the presence of THC in the body. THC is the psychoactive component that makes people feel high when they smoke weed.

Researchers found that long term exposure to weed can alter the function of the hippocampus. In particular, there seems to be an alteration in how this part of the brain process information.

It is important to note here that neurons in the hippocampus are naturally lost as a person’s age. Chronic Marijuana use might accelerate this process. It means neurons may be lost faster.

Both adolescent Marijuana use and weed usage among adults need to be addressed. Young and old may be experiencing increased risks for serious problems.

Let’s consider the risks and effects of Marijuana among adults and adolescents individually:

In addition to these factors, we also need to focus on the fetus. There is also evidence available that suggests babies exposed to weed prior to birth may suffer from certain complications too. Thus, pregnant women need to be cautious – smoking weed increases the risk of cognitive problems in the baby.

The health risk is due to the fact that the THC content in weed could potentially carry over to the unborn baby. In fact, some studies have even linked a lower IQ in children with early exposure to Cannabis.

For this reason, women with Cannabis use disorders need to consider the fact that harm reduction can be made through quitting the use of Marijuana – at least for the period of time during which she is pregnant. Treatment centers are also available to help women in need. People who start with such a program may find that they are able to quit before the cognitive functioning of the unborn baby is affected.

Several studies have shown that Marijuana may have some medicinal properties. Recreational use of the drug, however, can be a disaster. Some have even referred to Marijuana as a gateway drug. Long term use of weed may have adverse effects on the brain. This is especially a growing concern among younger children, as it seems like Marijuana may interfere with earlier brain development.

Cannabis and Migraines – Does it Help or Cause Headaches?