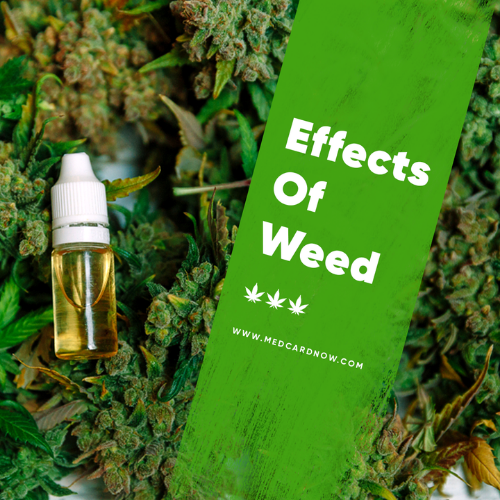 Effects of Weed: Short and Long Term Marijuana Effects on the Brain and Body

Marijuana has been credited with many effects on the brain and body, both positive and negative. Some of these are short term effects that last only a few hours whilst others a more long term and may not be evident immediately. Long term effects of marijuana are also likely to be influenced by how often you smoke, for how long, and when you started.

The effects of marijuana also seem to vary widely from person to person with some people experiencing euphoria and relaxation while others are left feeling paranoid and fearful. So while there may be many medicinal benefits it is possible that users may experience adverse health effects as well.

If you are looking for medical marijuana to help with chronic pain, increasing appetite, nausea and vomiting, anxiety disorders or inflammatory issues then you may need a doctor’s recommendation letter which you can apply for here.

How Cannabis Works – Endocannabinoids and What They Do

There are over 60 cannabinoids found in cannabis but two appear to be of particular interest and significance, tetrahydrocannabinol (THC) and cannabidiol (CBD). THC is thought to be the principal psychoactive ingredient while CBD is accredited with more of the therapeutic benefits of smoking pot. CBD does not impair cognition and may, in fact, have antipsychotic effects.

The fact that marijuana mimics compounds naturally produced by the body makes it unique from most other drugs. The body essentially has built-in receptors for cannabis whereas it treats alcohol for example as a poison.

Cannabis affects the brain and body. In the brain, these endocannabinoids control the production of neurotransmitters, the chemical substances that are responsible for communication between the brain and the nervous system. In the rest of the body, they perform many functions including relaxing the muscles, reducing inflammation and regulating your metabolism and appetite.

When you smoke THC stimulates neurons that wouldn’t normally be active. Marijuana users may notice a number of effects including enhanced sensations and changes in perception. People often report they are more creative when they are high which may be due to increased sensitivity to touch, taste, sound, colour and smell, while others will find they linger for longer on words, thought, or actions becoming more absorbed.

Short Term Marijuana Effects on the Brain and Body

One of the most obvious effects of marijuana, and the reason why it is a popular recreational drug, is the feeling of euphoria or getting high that it gives you. This is thought to be because it activates the same CB1 receptors in the brain as anandamide our natural bliss molecule.

It is cannabinoids connecting to CB1 receptors in the brain that is thought to be responsible for marijuana’s second most well-known symptom, increased appetite or ‘the munchies’. This is considered a positive effect by some and a negative effect for others.

Cannabis can stimulate hunger in the stomach and small intestine as well as affect your ability to regulate food intake via the hypothalamus. Enhancing eating pleasure and the palatability of food are also effects that can help with eating.

Pain has many causes and many types of pain are hard to treat and poorly understood. Marijuana has long been used to treat pain varying from headaches to sprains and conditions such as arthritis.

Recently cannabis has been seen as a viable alternative to opiates, especially for chronic, long-term pain and many pain sufferers have found marijuana effective at increasing their comfort.

Inflammation is an immune response and again cannabis has been used for centuries to reduce inflammation. It is thought that the presence of CB1 and CB2 receptors indicates cannabinoids play a key role in immune function.

If you suffer from chronic or acute pain medical marijuana may give better results than recreational marijuana meaning you may need a doctor’s recommendation letter and medical card.

One of the adverse effects marijuana can cause is the inability to form new memories and learn new things, a form of short term memory. THC attaches to receptors in the brain that are vital for memory formation found in the hippocampus, which is thought to be why it affects your memory and learning.

Another short term effect of cannabis is a change in your perception. The cerebellar cortex has lots of type 1 cannabinoid receptors and is the area of the brain responsible for coordination which would explain why users report the feeling that time is slowing down, as well as having trouble with balance and coordination leading to issues with driving or operating machinery.

Cannabinoids can also affect decision-making ability and judgment. You make decisions you wouldn’t normally make which is another reason why you wouldn’t want to be behind the wheel of a car or operating machinery while high.

Other short term effects include physical changes to your body. Enlarged pupils and red eyes are a visible sign that someone has been smoking marijuana. Marijuana opens the blood vessels which is why your eyes look red.

Paranoia is an often reported effect of marijuana users. This is likely to be linked to the Amygdala. This part of the brain is strongly linked to our ability to feel certain emotions including fear and it is thought to be for this reason that some users can experience panic, fear and paranoia when smoking cannabis.

Long Term Marijuana Effects on the Brain and Body

Less is known about the longer-term effects of regular marijuana use. Some marijuana users report harmful effects while others do not and there has been little conclusive research.

Long term use can lead to a lack of motivation and affect your ability to learn and concentrate and the effect of smoking pot seems to be particularly damaging to developing brains. Regular users will build up a tolerance meaning they have to consume more to get the same effects and many experience withdrawal symptoms. Withdrawal symptoms can include cravings, mood swings, irritability, difficulty sleeping and restlessness.

It is unclear how many people find marijuana addictive. Some people may become dependent on cannabis and this is more likely if you start when you are young and use it daily. Possibly more worrying is the fact that marijuana abuse is often viewed as a gateway drug to other illegal drug abuse and addiction which can lead to drug overdoses and many other adverse impacts.

Regular cannabis use can be linked to an increased risk of developing mental health problems including psychotic illnesses such as schizophrenia that result in hallucinations and delusions and again it is suggested that this is more of a risk if smoked during brain development.

Tobacco smoking has also been clearly linked to an increased risk of lung cancer although there are other ways to consume cannabis and still get the effects you are looking for.

If you need a medical card you can speak to a doctor online today and get a decision in minutes.

How to Get Weed Out of Your System – Marijuana THC Detox

How to Get Weed Out of Your System Fast