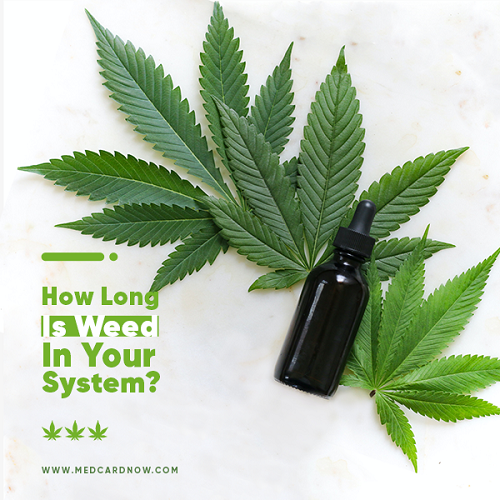 The question “how long is weed in your system?” is not a simple question as the answer depends on a variety of factors.

How long you will feel the effects of marijuana is also different to the length of time weed stays in your system from the perspective of drug screening and how long it might take a person to deal with marijuana withdrawal.

Marijuana detection time, how long a person will feel the effects of smoking weed and eliminating THC from the system is also influenced by a number of factors including frequency of use, body mass and metabolism, and the amount of THC or strength of the cannabis consumed.

These factors make it difficult to give a definitive answer as frequent users will have a longer detection window than infrequent users, and medical marijuana may have lower THC levels marijuana sold for recreational use.

You can apply online for a medical recommendation today to be able to access medical marijuana dispensaries in California.

How Long Weed Makes You High

When you have smoked marijuana the active components are quickly released into your bloodstream and start having an effect on your body when cannabis consumption is in the form of food or drink the effects will take longer to appear.

Delta9 THC, the main psychoactive ingredient in cannabis that is responsible for getting you high, attaches to cannabinoid receptors on neurons in the brain and activates them. THC affects the areas of the brain that influence memory, coordination, pleasure and sensory perception, including causing the brain to release dopamine which contributes to the pleasurable high. Marijuana users often report a sense of relaxation, a pleasant euphoria and a greater perception of colors amongst other effects.

However not all cannabis users experience the same effects and some people experience anxiety, fear and panic as well as feeling faint or sick.

Once you have consumed cannabis your body processes THC into THC metabolites before excreting them and eliminating THC from the body. The most common metabolite THC-COOH is the metabolite measured when testing for marijuana, in particular, when urine testing and conducting hair follicle tests.

Once THC has been metabolized you will no longer feel the effects but the drug remains detectable in a person’s system for varying amounts of time depending on the type of test being used.

Generally if you smoke cannabis you will start to feel the effects within minutes and the high will last for between 1 and 3 hours. When you eat cannabis products the THC first needs to pass through your digestive system and so the effects are slower to appear and can last for longer.

Factors that influence the length and intensity of the high include THC dose and your metabolism. There is also a difference between occasional users and heavy users as a chronic user will build up a tolerance and therefore feel less of an effect.

How Long Does Remain Detectable in Your System?

While the effects of weed wear off quite quickly marijuana tests can detect cannabis use and give positive results for periods of time ranging from 24 hours to 90 days depending on the type of test, the cutoff concentration and the frequency and intensity of use.

Factors that influence detection times include THC concentrations, your metabolism and whether you are an occasional or chronic user.

Marijuana drug tests might be used for a number of reasons, to check for substance abuse in treatment centers, as a condition of employment, or to test for drug and alcohol intoxication while driving.

As such detected marijuana may be in the form of detectable THC suggesting current intoxication, for example, saliva testing by police at the side of the road, or testing for metabolites in urine drug tests that will test positive if the person has used recently even if they are no longer under the influence.

Marijuana detection from oral fluids is usually detectable for up to 24 hours, although this time frame can increase for chronic users. This test can detect THC rather than its metabolites and does not check for CBD. If you are expecting a saliva test and need to use cannabis medicinally you may be able to switch to CBD products until you have got your drug test result.

Urine drug tests are designed to detect THC metabolites rather than THC itself. This increases the marijuana detection window and means you can test positive days or even weeks after the last time you smoked.

According to the Mayo Clinic THC metabolites appear in the urine from around 30 minutes but may take up to four hours, the test can detect these metabolites for anywhere from around 3 days for an occasional user, to over 30 days with chronic heavy use.

A hair test can detect cannabis use for even longer up to around 90 days and might be used to monitor drug addiction and drug abuse as well as for certain types of employment. The hair test results are unlikely to be positive if you have only used once.

While marijuana is not generally considered addictive problem use can develop and in extreme cases this can take the form of addiction. Substance abuse disorders also known as drug addiction will generally require addiction treatment to get back to sober living.

Marijuana dependence can lead to withdrawal symptoms when you stop taking the drug. These symptoms usually peak at around seven days and can last for up to two weeks.

If you use, or are thinking about using cannabis medicinally you may need a medical marijuana card to allow you access to medical dispensaries and a greater variety of plants that are cultivated specifically for therapeutic use. Many therapeutic strains contain higher concentrations of CBD and lower concentrations of THC which may be preferable for those who are looking for the therapeutic benefits without the high.

What States Have Legalized Marijuana?