Colorado Marijuana Laws – What You Ne... 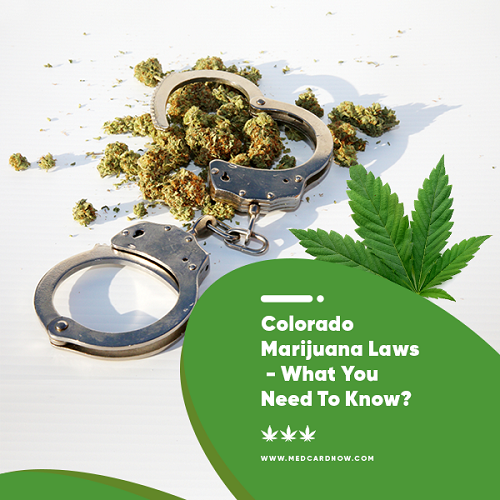 Colorado Marijuana Laws – What You Need to Know

Colorado is well known for being one of the most liberal states as far as cannabis law is concerned. Medical Marijuana laws in Colorado allow

Colorado voters approved an amendment in 2012 legalizing marijuana possession as well as the sale and cultivation of recreational marijuana within the state. Colorado residents passed the amendment on the 6th of November 2012, marijuana sales to the public began on the 1st of January 2014.

This made Colorado the first state to legalize marijuana for recreational use, with Colorado marijuana laws already allowing medical marijuana since 2001.

Colorado laws have allowed patients to legally possess two ounces of usable marijuana and up to six marijuana plants providing they have a letter of recommendation from an approved physician.

If you are in need of a doctors’ letter of approval you can apply online today in minutes.

Patients must register with the Colorado Medical Marijuana Registry to receive a medical marijuana card that serves as a form of identification, allows them to use medical dispensaries, and is proof that they are entitled to be carrying more than the recreational legal limit if stopped by the police.

The Law Regarding Recreational Cannabis in Colorado

The Law regarding recreational cannabis in Colorado was introduced in 2001. Allowing adults over 21 to have and use marijuana for recreational purposes. They may buy only from licensed retail stores and buy or possess up to one ounce of marijuana at a time.

The law in Colorado also allows residents to cultivate six plants or fewer providing only 3 are flowering at any one time. They may also give away up to one ounce to another adult over the age of 21 but must not sell without a retail license.

In contrast to some other states you do not have to be a resident to legally purchase marijuana from a cannabis dispensary in Colorado, although you do need to be able to prove you are over the age of 21. This has led to Colorado becoming a destination for cannabis tourism and people can book themselves into Denver marijuana tours that show how cannabis is grown and concentrate and edibles are made. Plus there are a number of cannabis-friendly hotels that have policies on smoking or vaping to allow people to consume cannabis products discretely.

Despite the possession of marijuana and the consumption of marijuana being legal for adults over the age of 21 in Colorado, and the state licensing establishments to sell marijuana there are still laws and penalties that you need to be aware of within the state.

Under Colorado marijuana laws adults may possess up to one ounce of marijuana. It is still illegal for anyone under the age of 21 to buy or possess retail marijuana. Initially, there were no separate rules for cannabis concentrate but due to higher THC levels The Marijuana Enforcement Division (MED) changed the rules imposing purchase limits of 8 grams of concentrate per transaction although you may still be in possession of up to 28 grams of marijuana concentrate.

Possession of over an ounce but less than 2 ounces is considered a petty offense and subject to a $100 fine. If you are caught with more than 2 ounces however you could face a much larger fine and even jail time with the maximum penalty for possession of over 12 ounces being 2 years in custody and a $100,000 fine with the offense considered a felony.

Selling, transfer or dispensing up to 4 ounces is considered a drug misdemeanor punishable by 6-18 months in jail and a fine of up to $5000 but again over that quantity is considered a felony punishable with much higher penalties.

Consuming marijuana in Colorado is also not as straightforward as you might imagine especially for non-residents. Public consumption is still prohibited other than in licensed consumption venues. Colorado residents may consume cannabis products in their own homes providing there are no building or landlord restrictions in place.

The Colorado Department of Revenues are responsible for regulating the marijuana industry in Colorado. They grant licenses for each marijuana business and for business employees. The department of revenue lays out the rules and regulations for marijuana products including marijuana taxes and labeling of bud, concentrates and edible products and collects sales taxes. Business owners and employees must complete a license application.

Although Colorado has legalized marijuana it is still illegal under federal law meaning you are not allowed to possess marijuana on federal land. So watch out if you are heading to the rocky mountain national park or any other federal land as possession is punishable by up to a year in jail and a $1000 fine for a first offense and a mandatory 15-day sentence that can be extended for a second offense.

Driving Under the Influence

Driving under the influence or while impaired by marijuana or any other drug is illegal as well as being unsafe, and you can be arrested for impaired driving and subjected to drug testing if police suspect that you have smoked marijuana.

There is a legal limit for blood THC content in Colorado of 5ng/ml. Anything over this and you can be charged. A first offense where no one is hurt will usually be charged as a drug misdemeanor punishable by a fine and or jail time. Repeat offenses or offenses where someone is injured or killed are likely to be charged as a felony.

Container law is also in effect in Colorado meaning you cannot travel with an open container of cannabis in the vehicle and that applies to passengers as well as drivers. And you must remember that it is illegal to take marijuana products out of the state, to Denver airport or onto federal land.

Why Am I So Thirsty? Thirst & Other Marijuana Side Effects

What States Have Legalized Marijuana?