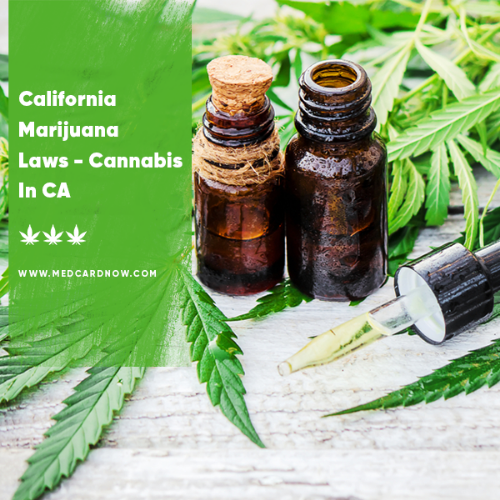 California Marijuana Laws – Cannabis in CA, What You Need to Know

California was the first state to legalize marijuana for medicinal use and has since legalized cannabis for recreational use as well.

There are a number of laws that control and regulate marijuana in California covering the cultivation, manufacture, transportation, sale, and possession for both medical and recreational use and restrictions to that use.

It is also worth being aware that cities and counties can have their own regulations and many prohibit or regulate dispensaries and cultivation and that the possession and distribution of cannabis is still illegal under federal law which cannot be overridden by state law.

The use of medicinal marijuana has been legal in California since Proposition 215, the “Compassionate Use Act,” passed in 1996, meaning that patients can obtain and use medical cannabis with a doctor’s recommendation.

Further laws have been passed to legalize recreational cannabis but these have not changed the medical marijuana law. With doctors recommendations, patients can grow or possess larger quantities than recreational users, up to 8 ounces of dried cannabis and are not subject to the eight-gram limits on concentrated cannabis.

If you are under 21 you must have a doctor’s recommendation to purchase cannabis. Plus you can save money on marijuana taxes with ID cards.

If you need a medical card we offer a quick simple service, and you can have a PDF copy within minutes of being approved.

The compassionate use act also allows primary caregivers to cultivate marijuana plants for up to five patients.

Purchasing and Possession of Marijuana

AUMA allows purchasing and possession of up to 28.5 grams of marijuana, 1 ounce, or up to 8 grams of concentrated cannabis such as hash. Possessing more than 8 grams is a misdemeanour felony punishable by up to 6 months in jail.

A cannabis concentrate is defined as cannabis that has undergone a process to concentrate one or more active cannabinoids for increased potency. Resin is considered a concentrate.

Under the measure adults over 21 with state-issued ID are able to purchase marijuana legally from state-licensed businesses and delivery services. These businesses are generally not allowed to be located within 600 feet of a school, daycare center, or youth center and are not permitted to sell alcohol or tobacco.

Local Governments may also issue a license for on-site consumption so you may find smoking lounges attached to a cannabis dispensary and even cannabis cafes. However, these areas must not be visible from a public place or allow access to or be within sight of anyone under 21.

Under AUMA the term “smoke” is used to cover all methods of consuming marijuana, this includes inhalation as well as using electronic devices such as vaporisers and ingesting a cannabis product.

Smoking is permitted in a private residence or a business licensed for on-site marijuana consumption.

If you need a physician’s recommendation letter for medicinal marijuana you can apply for one here.

Under AUMA individuals over 21 are permitted to cultivate up to six plants for their own use providing they are not visible to the public.

California Code, Business and Professions Code – BPC § 26000 known as the Medicinal and Adult-Use Cannabis Regulation and Safety Act has the purpose and intent to establish a comprehensive system to control and regulate the cultivation, distribution, transport, storage, manufacturing, processing and sale of both medicinal and recreational cannabis.

It lays out the responsibilities of different state departments in the licencing and regulation of cannabis cultivation, manufacturing, transportation and sale within the state.

This act gives the Bureau of Cannabis Control ‘sole authority to create, issue, deny, renew, discipline, suspend, or revoke licenses for microbusinesses, transportation, storage unrelated to manufacturing activities, distribution, testing, and sale of cannabis and cannabis products within the state’. The Department of Food and Agriculture administers the provisions relating to marijuana cultivation and the State Department of Public Health administers the provisions relating to manufacturing.

The division also lays out the penalties for any person engaging in commercial cannabis activities without a license.

California Code, Health and Safety Code – HSC § 11357.5 deals with punishments that can be issued to those found in possession of cannabis, not in accordance with the law as well as possession of illegal synthetic cannabinoids

It is worth noting that patients who cultivate, store, transport or manufacture cannabis solely for their own medicinal use or a primary carer who does the same for up to 5 patients are exempt from needing a licence according to this division.

Need a medical card? Speak with a doctor now and get your card in minutes.

How to Get Weed Out of Your System Fast

Is Weed Legal in California? What You Should Know